It was a record breaking season for diving senior, Kobe Tray '19. Kobe has been an integral member of the School's swimming and diving program since his freshman year in 2015 – being the New England Division I Champion and Founders League Champion in the 1 meter diving event all four years. This year Kobe has broken a slew of pool and School records to cap off his historic 2018-2019 season: 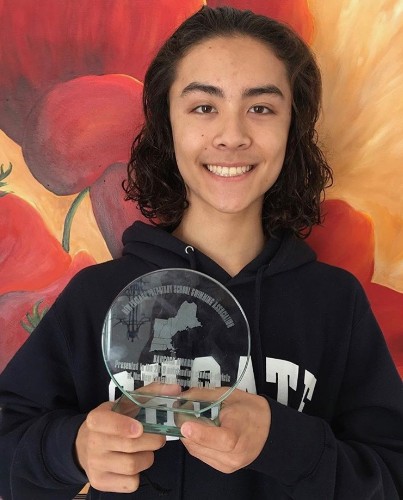 In addition to these records, Kobe also holds the Suffield Academy pool record. His performance at the Hotchkiss dual meet was only 5 points off the all-time New England record which was established almost 25 years ago.

Kobe was also selected by the coaches of the NEPSAC Division I as the recipient of the Wilmot S. Babcock Award at the NEPSAC Division I Championships. This award is the league's highest honor and is given to the most outstanding male swimmer or diver who also demonstrates good character, sportsmanship, and has the greatest contribution to the league. He is the first diver to receive this award since 2013 and the second consecutive Choate athlete, following the 2018 recipient, Scott Romeyn '18.

With his performance at the New England Division I Championships this year he far surpasses the qualifying score for All-American consideration, however determinations for this are not made until this summer. Kobe will continue his diving career next year at Williams College located in Williamstown, Massachusetts.