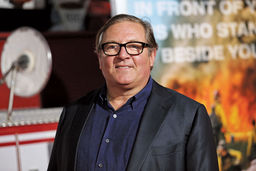 2019 Commencement Speaker & Alumni Award Winner: Lorenzo di Bonaventura '76
May 13, 2019 10:26 AM
Share to FacebookShare to TwitterShare to LinkedInShare to Pinterest

Head of School Dr. Alex Curtis announced earlier this month that filmmaker Lorenzo di Bonaventura '76 will deliver Commencement remarks to the Class of 2019 on Sunday, May 26. Mr. di Bonaventura is also the recipient of this year's Alumni Award.

Each spring, Choate Rosemary Hall presents the Alumni Award to an alumnus/a for outstanding achievement in his or her chosen profession. This is the highest award the School bestows upon a graduate. The 2019 Alumni Award will be presented to Mr. di Bonaventura for his distinguished career as a filmmaker.

Upon graduating from Choate Rosemary Hall, Mr. di Bonaventura went on to pursue an undergraduate degree in Intellectual History from Harvard University and a Master of Business Administration from University of Pennsylvania's Wharton School of Business. After a stint on Wall Street, a year in Indonesia, and earning a cooking diploma from Ecole La Varenne in Paris, Mr. di Bonaventura arrived in Hollywood in 1988 as a cable-TV analyst for Columbia Pictures. He transitioned quickly to the production side, and in 1989 took a position as Vice President of Production for Warner Brothers.

While at Warner Brothers, he was involved in over 130 productions and eventually became President of Worldwide Production. Amongst his biggest commercial and critical successes were The Matrix (1999) and Harry Potter and the Sorcerer's Stone (2001). In his early days, di Bonaventura became known for taking risks and scouting out the new crop of Hollywood actors, eyeing the largely untested George Clooney in 1996 for the role of Batman in the third Batman sequel.

In 2002, he started di Bonaventura Pictures, based at Paramount Pictures. Since then, he has produced over 30 movies, including Shooter starring Mark Wahlberg (2007) and the Transformers spin-off Bumblebee (2018). On April 5 of this year, Mr. di Bonaventura's bold adaptation of Stephen King's novel Pet Sematary was released. In 2011, the company branched into television production with the formation of di Bonaventura Pictures Television, which produced The Real O'Neals and Shooter.