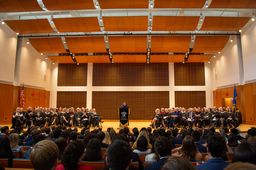 On Tuesday, September 3, Dr. Curtis convened 854 students from 38 states and 46 countries, and faculty and staff for the School's 130th Convocation held for the first time ever at Ann and George Colony Hall. Made possible through the generosity of a lead gift from Trustee George F. Colony '72 and his wife, Ann, the 50,000-square-foot auditorium and classroom building designed by Robert A.M. Stern Architects is an architectural and programmatic complement to the Paul Mellon Arts Center.

During the ceremony, Dr. Curtis recognized three local fire chiefs, Chief Richard Heidgerd of Wallingford; Chief Kenneth Morgan of Meriden; and Chief Robert Kronenberger of Middletown for their department's assistance earlier this summer. On July 22, in the midst of a violent summer storm, a lightning strike hit Hill House resulting in a fire in the roofline. Said Dr. Curtis, "For the firefighters' skill and bravery, Choate Rosemary Hall is forever indebted. Because of their heroic actions and their extraordinary tactics, the fire was contained to a relatively small area within Hill House." As an expression of gratitude, Dr. Curtis has extended an invitation to all the responding firefighters and their families to attend an upcoming Sunday brunch in Hill House Dining Hall.