At the 129th Commencement Exercises on Sunday, May 26, Head of School Alex D. Curtis and the Board of Trustees of Choate Rosemary Hall bestowed diplomas and certificates to the senior class of 244 graduates. 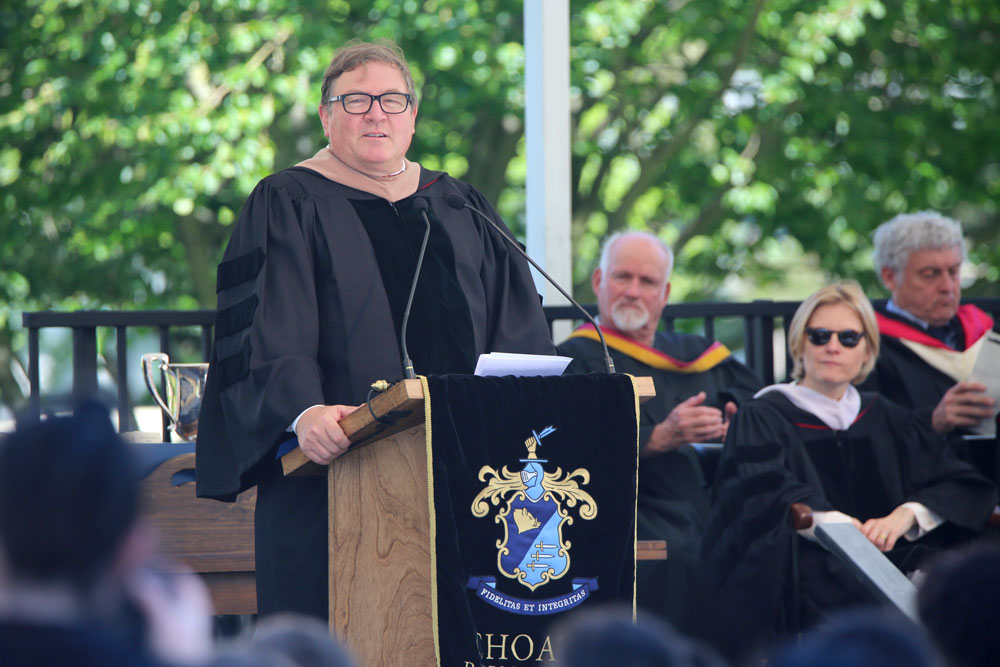 Filmmaker Lorenzo di Bonaventura '76 delivered Commencement remarks to the Class of 2019. Mr. di Bonaventura is also the recipient of this year's Alumni Award.

Upon graduating from Choate Rosemary Hall, Mr. di Bonaventura went on to pursue an undergraduate degree in Intellectual History from Harvard University and a Master of Business Administration from University of Pennsylvania's Wharton School of Business. After a stint on Wall Street, a year in Indonesia, and earning a cooking diploma from Ecole La Varenne in Paris, Mr. di Bonaventura arrived in Hollywood in 1988 as a cable-TV analyst for Columbia Pictures. He transitioned quickly to the production side, and in 1989 took a position as Vice President of Production for Warner Brothers, where he was involved in over 130 productions and eventually became President of Worldwide Production.

Amongst his biggest commercial and critical successes were The Matrix (1999) and Harry Potter and the Sorcerer's Stone (2001). In 2002, he started di Bonaventura Pictures, based at Paramount Pictures. Since then, he has produced over 30 movies, including Shooter starring Mark Wahlberg (2007) and the Transformers spin-off Bumblebee (2018). On April 5 of this year, Mr. di Bonaventura's bold adaptation of Stephen King's novel Pet Sematary was released. In 2011, the company branched into television production with the formation of di Bonaventura Pictures Television, which produced The Real O'Neals and Shooter.

In his remarks to the class, di Bonaventura noted that open-minded thinking was one of the most important lessons he learned at Choate and has been a key to his success. He emphasized that those who take pleasure in learning and continue to learn will go far in life.

In his valedictory remarks, Dr. Curtis, a lifelong Leeds United fan, celebrated our graduates alongside Leeds' incredible and meaningful season. He noted that success is measured not by an end result, but in the journey. He encourages graduates to look beyond wins and losses to reflect on how far they've come, celebrating achievements and setbacks alike.

Friends and family from across the globe joined faculty and staff to celebrate in Wallingford. Congratulations, Class of 2019!