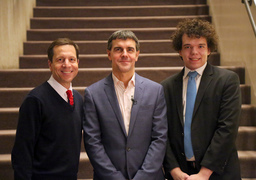 On Monday, March 25, the History, Philosophy, Religion, and Social Sciences department hosted James Surowiecki '84, who presented this year's Stevenson Lecture. Since 1976, the annual lecture, named for Illinois governor, two-time presidential candidate, and UN Ambassador, Adlai Stevenson II Class of 1918, has brought to campus speakers who have made a distinguished contribution to public life and who might inspire students to public service.

In his remarks, James focused on the issue of crowd mentality, discussing how groups of people together can be more knowledgeable or wise than individual participants. He specified that certain parameters must be met for this to work – namely diversity, independence, and decentralization. He explained that social media can warp these parameters and diminish the overall wisdom of crowds, hurting the efficacy of the internet.

James visited four classes on Monday and Tuesday in a wide variety of disciplines. Says HPRSS teacher Jonas Akins, "Students were very impressed with Jim's range of knowledge, his deep engagement with the students, and his clear enjoyment in being back on campus. [Students] also really appreciated the message that social media can distort their own world view, to the detriment of one of the aims of the internet."

This year's Junior Fellow was Ian Bamford '19, who delivered a brief interpretation of the life and work of Adlai Stevenson. James was a Junior Fellow himself about 35 years ago.

Photos of the event are available here.